Setting up a Recording Rig in Your Rehearsal Space 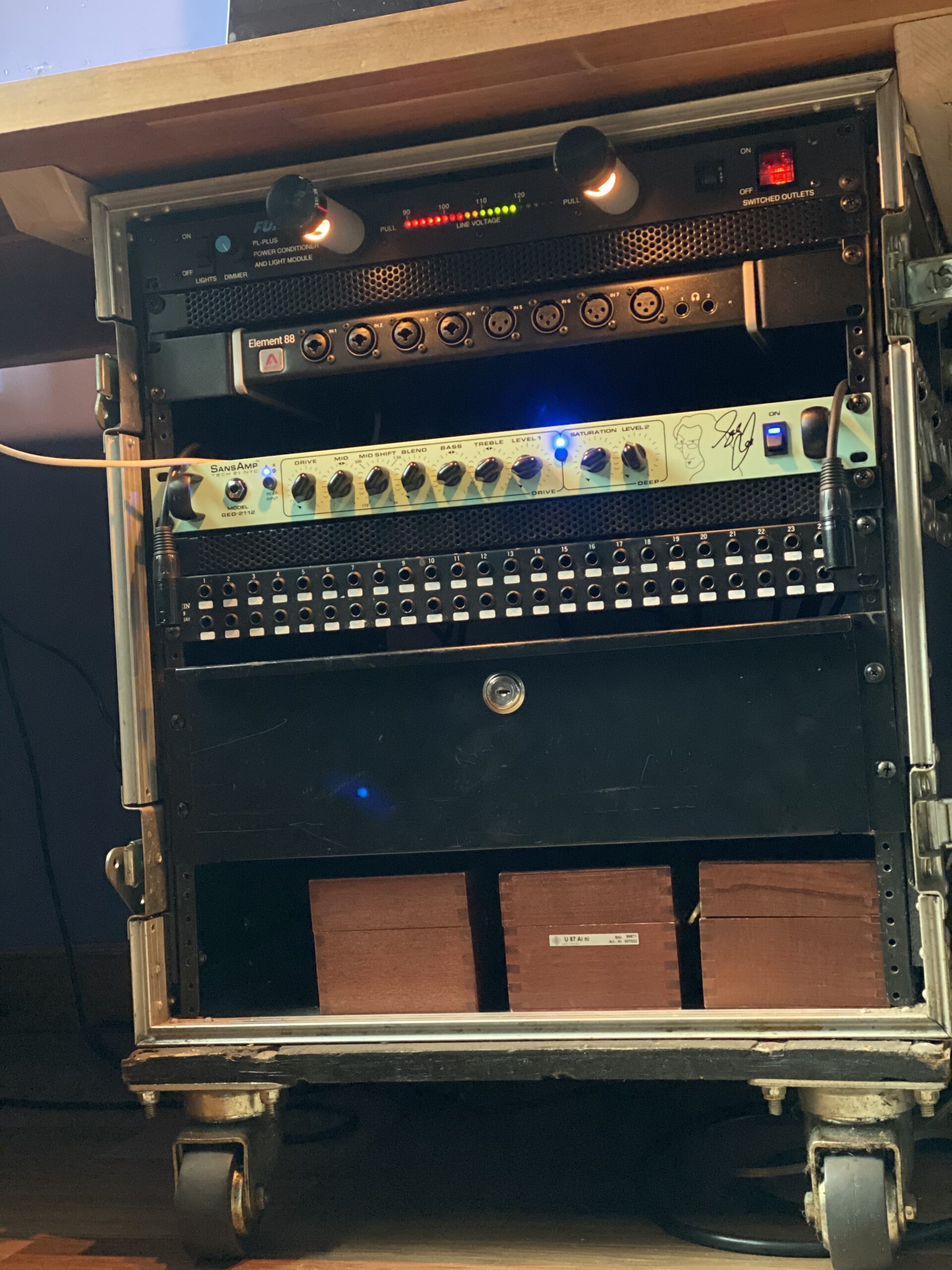 I’ve had my own commercial recording studio for over twenty years. I recently decided to close it. You can read my previous blog “Why I’m Closing my Recording Studio” if you want to know more about that. I still want to record. I have a band and I have a handful of clients that I would still like to help when they need help.

I could have just kept my recording studio rig and set it up in my jam space, but I decided to start fresh. Of course, I’m going to keep a few pieces of my favorite gear. I’m particularly fond of my Neumann stuff. I have a U87 which I don’t think I’ll ever sell. It’s a classic piece that will never go out of style. It’s awesome for vocals of course, world-class, but it can be used for a room mic when recording drums and guitar cabinets. I like to use it over the rim of the kick drum as a kick drum mic. Plus I got it for a steal and I’ll never be able to replace it at that price.

I have a couple of Neumann TLM103s that I love to use as a stereo pair. I use them for overhead drum mics. I can use them for effect mics when recording vocals. I’ll set them up a few feet off of the vocalist to capture a bit more of the reverb in the room. I can use them on close up vocals too. Sometimes the U87 isn’t quite right for everyone’s vocals. The TLM103 can be just the right tone sometimes. Howard Stern uses one as his main broadcast mic and he could use anything he wanted. They are just super versatile and they always sound great.

For my monitor speakers, I will be using a pair of Neumann KH120As. Neumann has just recently gotten into the speaker game and boy do they know what they’re doing. I found many of my engineers liked to use them as their main monitoring source over my Yamaha NS-10s. I considered keeping my NS-10s as they are classics and they are so flat in their response that they keep you very honest as an engineer. But, I will be farming most of my mixing out to other engineers. I just need the speakers for reference while tracking. So the Neumanns will suit me just fine, plus I don’t have to have a separate power source. This will keep it compact. I need the space as I recently combined my rehearsal space with my office.

For my interface, I will be trying Apogee’s new Element 88. I just got it and from the reviews I’ve seen and read online it looks like exactly what I’m looking for. The preamps in the unit are renowned for their transparency and clarity. Apogee’s digital to analog conversion is very well respected. Like, I said before, this rig is going to be a tracking rig. I just need to be able to deliver great sounding tracks to an excellent mixing engineer. This unit should do the trick.

My plan is not to use anything but the pre-amps in the Apogee. I have eight tracks. Eight tracks should get me all I need to record a set of drums. The drummer in my band Silverseed only uses one rack tom, so I’ll be using two mics on the kick (an AKG D112 on the inside and the U87 on the outside. I’ll put an SM57 on top of the snare and a Beta57 on the bottom. I’ll either use my Shure Beta 98AMP/C’s on the floor and rack toms or my pair of Sennheiser 421s. I’ll use the Neumann TLM103s for overheads. I’ve hardly ever used a mic for the hi-hat. The hi-hat track always seems to be dropped when it comes to mixing time anyway, especially when making rock records. If I do need more hi-hat on a drum track, I’ll just angle one of the TLMs toward it.

I’ve been using Pro-Tools in my studio since the beginning of Pro-Tools. Pro-Tools is a great format. I’m not going to complain about the fact that it’s a yearly subscription now… But it’s time for a shift. I’m going to start to work with Logic. Because almost everything I’ll be doing now is tracking, I will not need a bunch of plug-ins for mixing. I just need to deliver high-quality tracks. Logic should get me there. The tracks are easily exportable and deliverable. Plus, I’m just more familiar with Apple software now (I use Final Cut for my video). The interfaces for both Logic and Final Cut are similar and they work well together. And, there is no question the digital quality of the tracks will be exactly the same coming out of Logic as Pro-Tools.

Having only eight tracks will not allow the band to record itself live, but when you’re tracking in a single room rehearsal space, that’s really not an option. What I usually do is lay the guitar and a scratch vocal down to a click track. We pump that through the headphones and track the drums. When the drums are done, we, one by one, track all of the instruments and vocals. I’ll monitor the signal with headphones in the same room.

When you’re in the same room as the performer, you have to work with some trial and error. You basically can’t hear the tracks as the drummer or guitar player is playing them. The bleed from the drums or amps is louder than the sound of the headphones. I usually set levels and then run through part of the song, stop and listen back. If there are any refinements to mic placement or level settings, I will do them in between takes. It’s laborious, but it works. I’ve been putting microphones on drum sets for so long that it’s second nature. I have my techniques that work. I have microphones that deliver the tone I’m after, so once I set the levels, I’m almost always happy with the sound. Plus, I’ve become fairly adept at tuning drums, which is really the most important thing.

For the bass guitar, I will almost always go direct. Right now I have a Geddy Lee Sansamp that works nicely. It colors the tone a bit, but in a good way if you like rock music. I’ll probably just go directly into the preamps too. If the bass is a high-quality bass that is set up properly with new strings and it has good pickups and internal components, the tone that is laid down directly from the bass is a great place to start for a mixing engineer. The mixer can use plug-ins or amp modelers to get the tracks to sound great in the mix from a clean direct track. If needed, that track can be re-amped (sent out to an amp and recorded again). I can always throw an AKG D112 on my 1974 Ampeg SVT 8X10 Flatback if I ever need just a little more personality right out of the gate.

For electric guitar I will run it through one of my five carefully picked guitar amps. My go-to technique is simple. Two mics on each cabinet. I’ll place a Shure SM57 on one speaker and a Beta57 on another speaker. Sometimes I’ll angle one or both to soften the impact on the diaphragm. These are close mics. Sometimes I press them into the grill cloth. I’ll use a flashlight to peer through the grill cloth to get the exact right placement, either directly in the middle of the speaker or in the middle of the cone. If I had two rooms and some separation, I would direct someone to move the mic slightly as a listened to the tone of the amp. I would get the exact right placement for the amp, but now that I’m in the same room, it will be trial and error. I’ll have to do a few test recordings and make adjustments in between to get the perfect sound.

Side note: If the cabinet has only one speaker, often I will throw a mic on the back of the cabinet, especially if the cabinet is an open design. This technique gives the engineer a little of the growl and lower tones to mix into the song if needed. I’ve never had a mixing engineer turn down more options to get the best tone.

When I’m monitoring and tracking in the same room, I’ll often use baffles as a way to separate the engineer from the performer. It’s less about decreasing the sound between the musician and engineer, it’s more about directing the sound. When I’m the one singing I can put some baffles around me and still get at the controls. When I’m recording someone else, I usually like to put the singer in a spot and put some baffles around them to direct the sound towards the mic and lessen some of the reverberations in the room. It’s more of an intuitive process than a scientific one. Sometimes the baffles are just about space, making the singer feel like they are enclosed and in their own little cocoon. When you only have one room, sometimes you just have to get creative.

I’m sure there are many more aspects to recording in a rehearsal space that I will re-discover and discover anew. I’m excited to have some control over my tracks again. To be honest, even the technology in my own studio was intimidating to me. For a while, I needed an engineer to help me just to play Spotify through the studio monitors. Pathetic.

I feel like I’ve come full circle in the recording game. Now, I’m once again back in a one-room rehearsal space and I have a record to make. In fact, I have two records to make: one for my own band and one for a friend who wants to record some of his originals. It’s funny how that works. I go back to my roots and I already have more to do than I have time for. I’ll have to remember to charge a little more than three dollars per hour like I did when I started in the mid-nineties. It would be hard to feed a family of six on those wages. 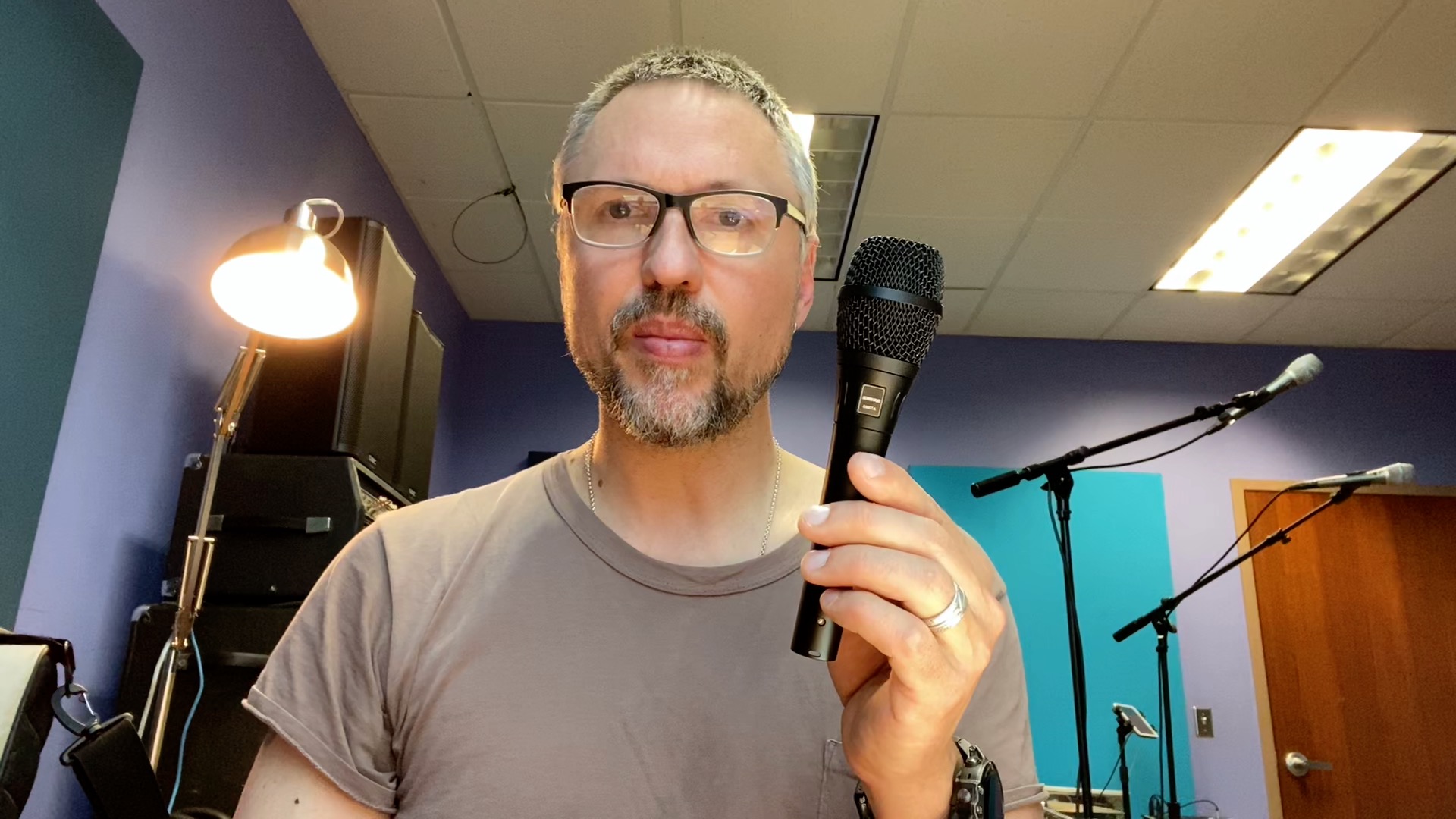