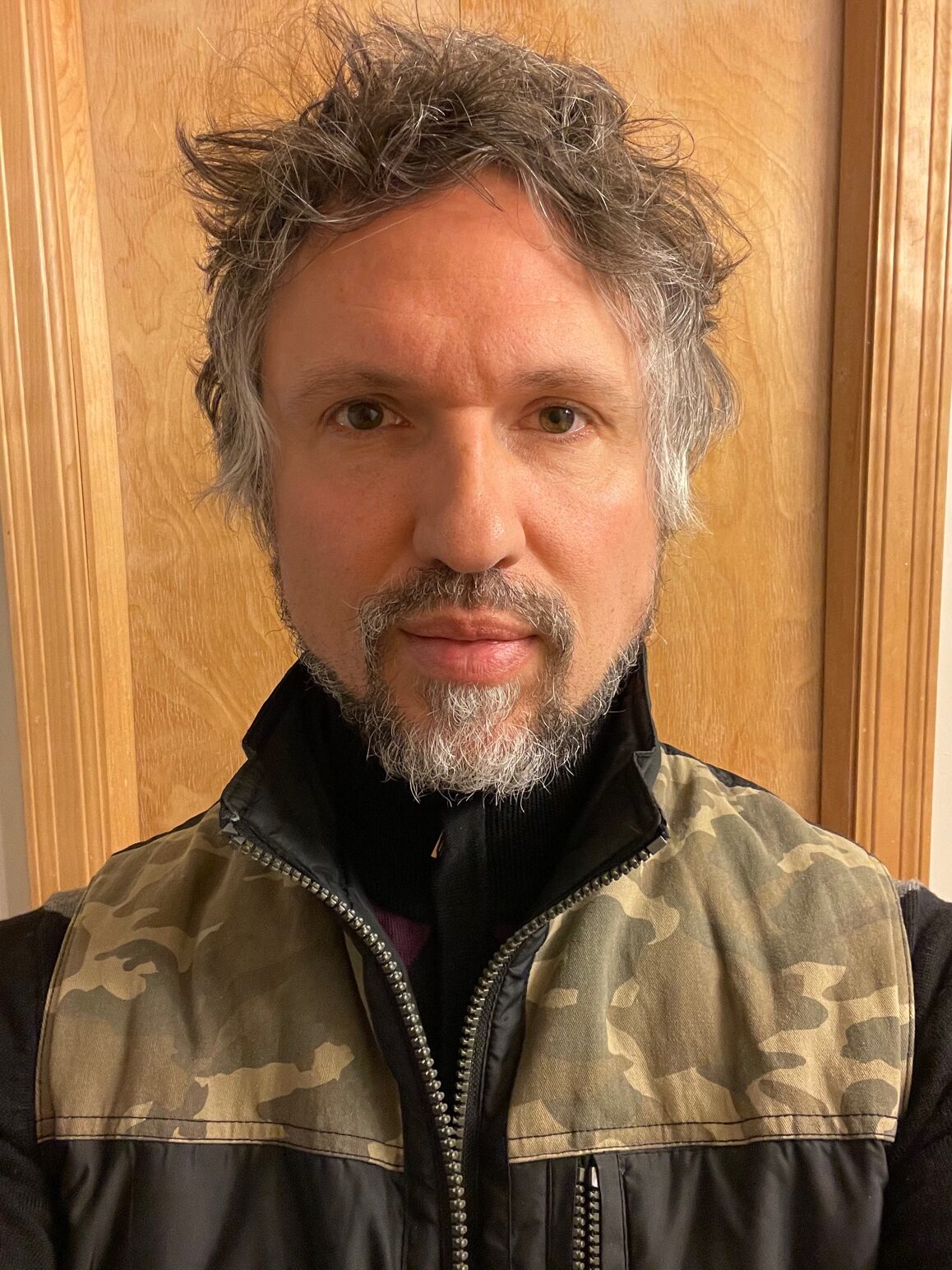 I began my journey in music in my freshman year in high school when I tried out for a part in the musical production Tom Sawyer. I landed the lead and I realized I could sing a little bit. Up until that point, my only musical experience had been imitating David Lee Roth and Paul Stanley in the mirror.

I have always been in love with music. The first album I ever bought was Kiss Alive II. It changed my life. Listening to that record, and soon many others, bouncing up and down on my bed with a tennis racket in hand, was a favorite childhood activity.

After being in almost all of my high school productions at a school called Woods Academy through my junior year, I was forced to transfer to Breck school before my senior year. (Woods Academy went bankrupt). I was intimidated in the new school. I was one of the only kids who wore their hair past their shoulders. It was a pretty clean-cut environment.

I don’t know exactly how it happened, but I decided to try out for their musical production of “Anything Goes”. I guess it was on a whim. I had befriended some of the creative types and we just decided to try out one day. Well, long story short, I ended up with the lead. Being in that play lead to my landing a role in my first rock band.

Some guys at school were in a band. They had been looking for a singer for a while, but just never found the right fit. My friend recommended that I give it a shot. The guys in the band had seen me in the musical production at the school and thought I might work out as the lead singer in their band. I reluctantly went over to the guitar player’s mom’s basement one afternoon and sang a few songs with them. I really wasn’t very good. If it weren’t for my long blonde hair, I think they would have sent me packing.

But, because I had a bit of a rock and roll look, they decided to hang with me for a few more rehearsals and a show at the infamous 7th Street Entry. After that better than average performance, they invited me to join the band.

We had some locally and regionally successful shows and we made a recording that became a bit of a hit amongst the high school crowd in the Twin Cities. But, as things go, we all went off to college and the band broke up.

I joined my next band in college. The same friend who recommended me to my high school band recommended me to this band. To be honest, I thought my time in rock and roll had passed. I wasn’t even thinking about singing in a band at that point, but I found myself in a cramped dorm room writing songs with a perfect stranger. Soon we were a band and, again,  had some local success playing live shows. We won a battle of the bands contest at our college, Hamline University. We played some shows warming up for some popular local bands, but as fate would have it, the band broke up when the main songwriter/guitarist moved away.

About a year after that, I started a band with the lead guitar player of that band. We’ve been playing together ever since. We’ve had a number of bands over the years, with varying degrees of local success, but it’s always been about the ritual of getting together, writing, practicing, recording, and performing our own music. I still get a charge from playing our songs. Music is my church.

After graduating from Hamline University with a Bachelor’s degree in Russian Area Studies (very useful right?), I accumulated some recording equipment and started learning to record my own music. Soon after, some other bands asked me to record them. Not long after that, I had a small stable of recording clients.

I rented a small room in a local recording studio, Mirror Image Studios. I recorded and mixed bands there. About a year later, I had outgrown that space, so I rented some space in Southeast Minneapolis. That was where I entered the rehearsal space business.

In that space, there were ten rooms. Three of those rooms made up my recording studio. The other seven were rehearsal spaces. I recorded bands and rented rehearsal spaces for about a year there. I had such a long waiting list for rehearsal space tenants, that it was obvious I needed to look for more space. About a year later, in the year 2000, I found a building on the north side of Minneapolis. With some outside investments and a little twist of fate, I was able to put some money down on that building and start to build out fifty rehearsal spaces.

The next twelve years were spent on the north side renting rehearsal spaces, recording bands, and playing my own music. In the year 2012 after the downturn in the economy and some unfortunate personal circumstances, I closed down the Northside location and re-located to Saint Louis Park, where I am still today.

We now have a fully automated booking system that allows musicians to book a rehearsal session or a video session online. They are able to retrieve keys and access the prepared space and have their session without ever interacting with a human. Don’t get me wrong, I love interacting with musicians, but I wanted to make rehearsals so convenient and easy that all the excuses not to practice could be put to rest.

I forgot to mention, in about the year 2008, I added “and Video” to Taylor Sound. We converted a space to a white room for video shoots and soon were getting business from local music video directors. We have continued to provide high-quality video facility and production services for local, national, and international video production clientele.

As for my personal life, I have five kids, which are, of course, the center of my universe. My wife Carllie supports me by holding down the fort at home. Someday, hopefully, I will be able to return the favor by giving her the time and space to fulfill her career goals.

I write almost every day. I haven’t figured out how to make it part of my livelihood yet, but I intend to do that.

I am a second-degree brown belt (next belt black) in Aikido. Becoming a proficient martial artist has been extremely important to me. About five years ago my physical well-being was threatened and I made a commitment to become less vulnerable in those scenarios. My martial arts practice is another central aspect of my life.

Speaking of central aspects, I am an avid bowhunter. In fact, it’s become a bit of an obsession. I try to shoot my bow every day, even during the off-season. I study white-tail deer, incessantly. I am passionate about providing clean, organic, free-range, lean meat to my family and friends. I love the woods. I love deer and all the other woodland creatures that I get to witness sitting in a tree stand all day in the fall.

I still practice guitar and drums about three times per week. Admittedly, my practicing has decreased over the years because I have added so many other things to my list of disciplines. But I still keep my chops up. I still write a song or two every month. I still can do a relatively speedy single stroke roll around the drum kit.

Over the years that I’ve been in the music business, I have been able to be around many musicians. Most have been local amateurs and some have been the greatest of the greats. Over twenty-five years of working with and listening to these musicians, I believe I have created, with a lot of help from very smart and creative folks, some of the most convenient, high-quality services for the amateur and working musician that the world has to offer.