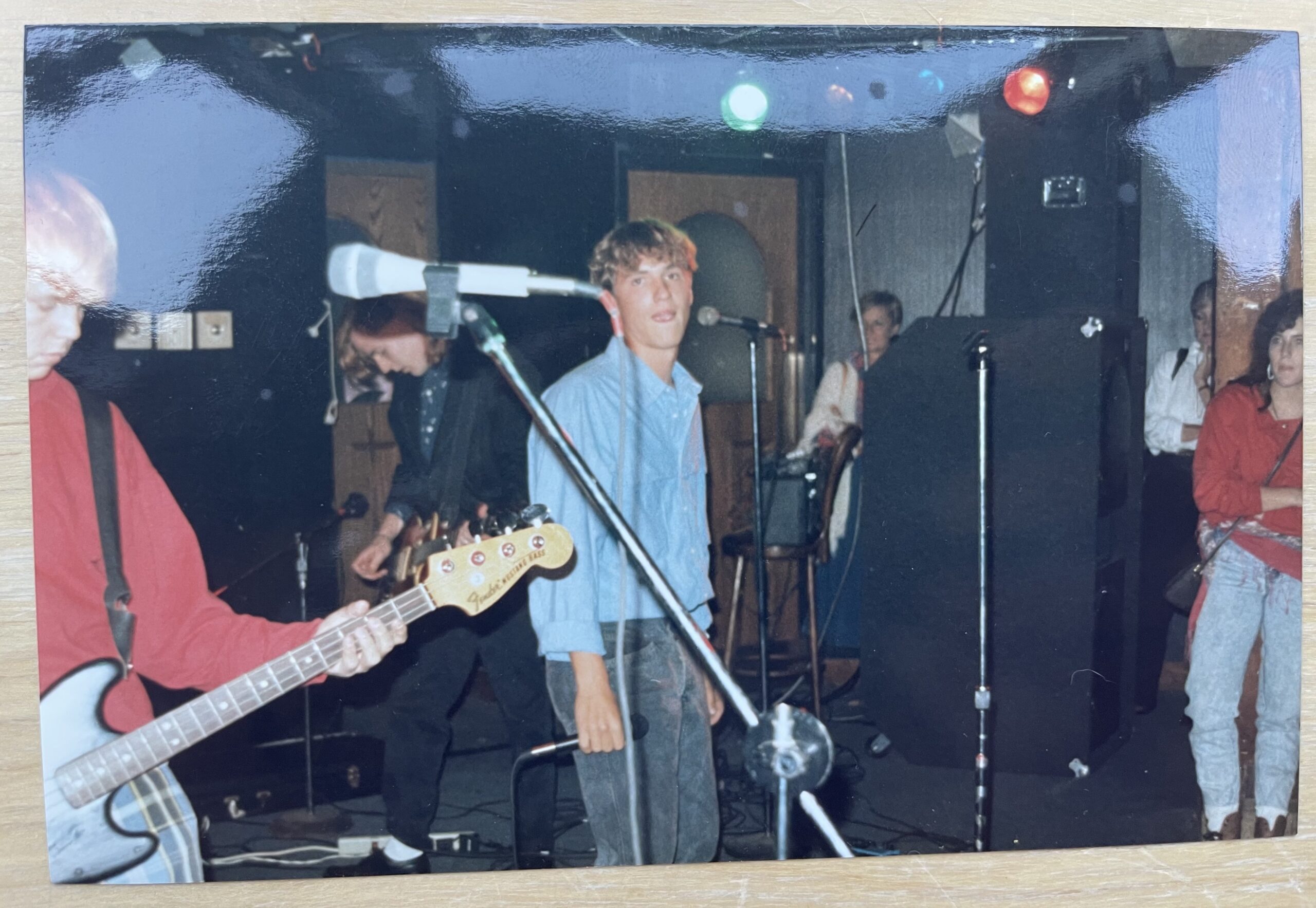 I remember the first time I wrote lyrics for an original song. In fact, let’s go back a little further when I first tried out for my first band. I was a senior in high school. I ended up in a preppy private school that year. How that happened is a long story I won’t go into now. At the time I was wearing my hair long; It was past my shoulders. It was very blond back then too. The kids were fairly open minded in that school, so the popular kids didn’t outright make fun of me, but they didn’t really accept me either. I was however accepted whole-heartedly into the art kids community.

Looking back, even though it hurt me a little to be shut out of the “cool” kids club, I ended up in the right place. By the time I graduated I had performed the lead in the Spring school musical. I was in a killer rock band. I had a ton of fun, creative friends. I had a lot going for me.

But, the acceptance in the rock band wasn’t all smooth sailing. My friend recommended me for the band. The guitar player asked me to tryout. I went over to his mom’s basement where they practiced twice per week. They had asked me to learn a couple songs beforehand. I remember a few songs by REM, The Church, The Doors and The Who. I fumbled through them. I probably messed up a lot, but I managed to hit enough notes correctly to be invited to jam again the next week.

I was relieved to walk out of that room that day. I was pretty nervous. By the time I was getting used to one song, they would throw another one at me. I was just trying to keep up. Let alone emote or belt something out. Luckily I had a few years of being in musicals under my belt. That was what really saved me.

The next week I came back slightly more prepared. We slogged through some more tunes. They asked me if I wanted to join then on stage the following month at the 7th Street Entry. They had secured a slot at the venue’s infamous “New Band Night”. The band would play a full set and I would sing lead vocals on five songs. I was petrified, but absolutely thrilled at the same time. I spent my formative years watching shows in that room. Now I was going to be the one onstage.

I thought the preparation for the show was going really well, but apparently that view wasn’t shared by everyone in the band. I can’t remember exactly when and where he told me this, but it made the whole performance, much more stressful. He said, “dude, this show is your final audition. It determines whether you’re in or out.” I looked at him and nodded my head. Of course, I thought, that’s fair. It’s not my band. Yet.

The show must have gone well enough. They decided to keep me around. This is when my skill as a singer and a songwriter was put to the test. Up until that point, I had just sung cover songs and an original or two for which they had already made recordings, so I just sang the originals the way they had written them. I was just copying other artists. But that started to change when I interpreted one of their songs. One of the guitar players brought in a song he was working on. He had a rough demo of it. I brought it home and started playing around with some of the vocals. I really got some juice out of that song. I was excited to bring it in and show them what I had done with it.

When I walked into the practice space that day, I had a little shimmy in my step. I was thinking about how it felt the night before when I was rocking out in my room to that song. I just let myself go. I just sang what came to me. I was channeling the rock gods. I felt it. I knew I was onto something special. These guys were fine musicians no doubt. They may have auditioned me because of my long hair, but now I was going to show them I was a rock singer.

The song started. This time I knew where the song was going and I knew where I needed to start. I started with some feeling, some inflection, some mood. Over the course of the song, the tension built. Soon we were at the end. I asked them (before the song started) to just jam on the last progression for a while. I had honed my improv somewhat, but I was still mostly singing off the cuff. But it went somewhere. There was energy there that was spine tingling. By the time the song was done, the guys were all feeling it too. We were finally a band. The right players were here. The chemistry was in place.

After that day, we tweaked a few more of their songs to get some more juice out of them. We added some covers that fit my style a bit more. We started to gel.

Now, back to where this blog started. One day they asked me to write some lyrics. This was a new one for me. I had never done it. I didn’t even know where to start.

The guitar player who wrote the music coached me through it. He said, “just sing something. It doesn’t matter. Just let it flow.” So I started and mumbled some melodies and words for about five minutes. Who knows how it sounded. I was just happy when they stopped making me embarrass myself. They told me to bring the demo recording home and work on it more.

That’s what I did. I felt a lot more comfortable at home. I did end up writing a melody and some lyrics. That song even got into our regular rotation in our live sets. It’s no hit song, but it started everything. It helped me realize how lyrics form. I had no idea of the process before they forced me to write these lyrics. The band saw it as a challenge I think. They wanted to see if I could do it. They wanted to see if I could grow as a musician.

I look back at that moment. My willingness to step out of my comfort zone and their challenge to me was a pivotal moment in my creative life. Now, I do that every day. I write music and I sing melodies with words on top of that music. It is such a huge part of my life now that I don’t even think about it. It just happens. Songs write themselves.

That band and that time in my life were incredible. We were just being creative. We were rebels. We were pushing back on the system in our own way. We were rock and punk rock. Some shows were fueled by substances, some were stone cold sober. Years later, our drummer who never touched alcohol told me that after I had consumed a half bottle of Jack Daniels, I yelled “fuck the police” before one of our songs started. We were in a VFW. Dumb, but kind if bad ass too.

Now that I’m older, of course, I would never say something like that in a place like that (or condone it), but our music, our attitude and our hope felt like we could change the world. We could stand on our creativity. People couldn’t say we were just some dumb kids; we had music. We could get people moving. That’s when I really got hooked. When I looked into the crowd and people were moving. I felt powerful. I’ve been chasing that feeling ever since.

I’m not saying we were the greatest high school band there ever was, but I am saying we had something. We played many shows to many young fans. We never seemed to disappoint. We won the school’s battle of the bands. We made a demo cassette that was distributed far and wide among the local high schools. Some of my friends who were fans of the band called us legends and called that cassette a classic. 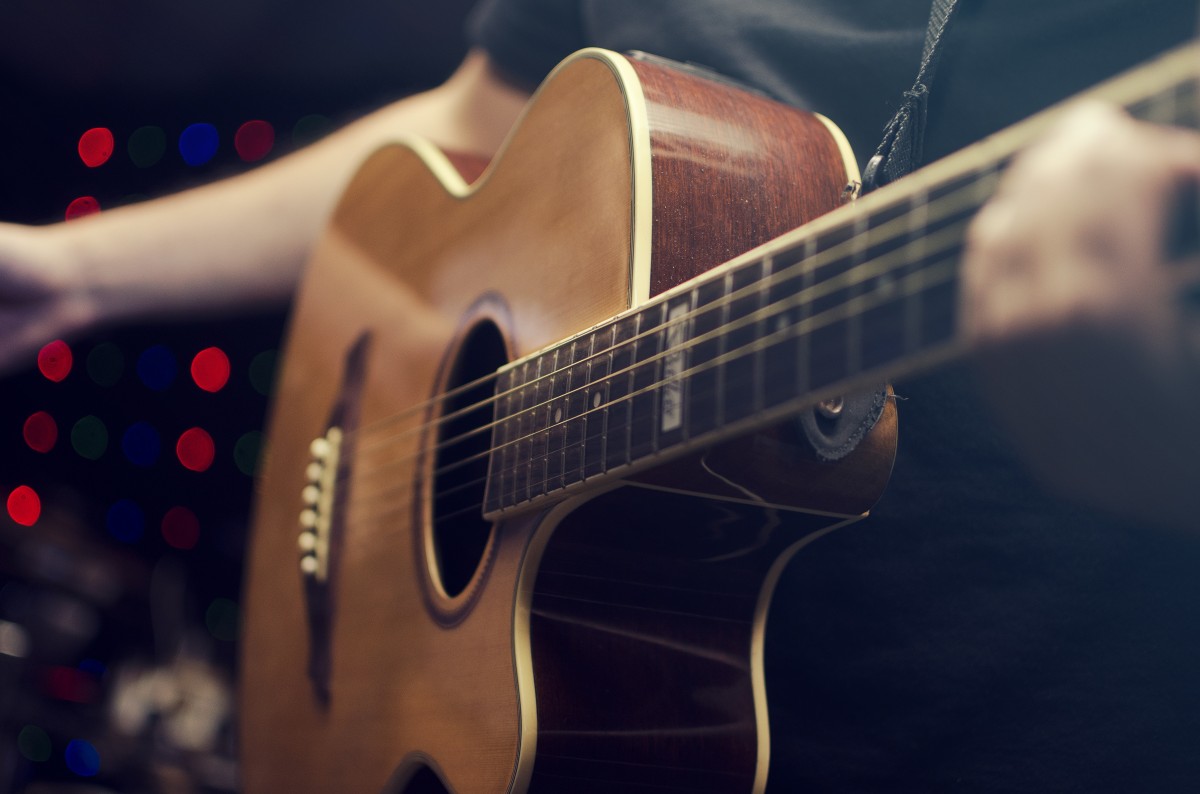